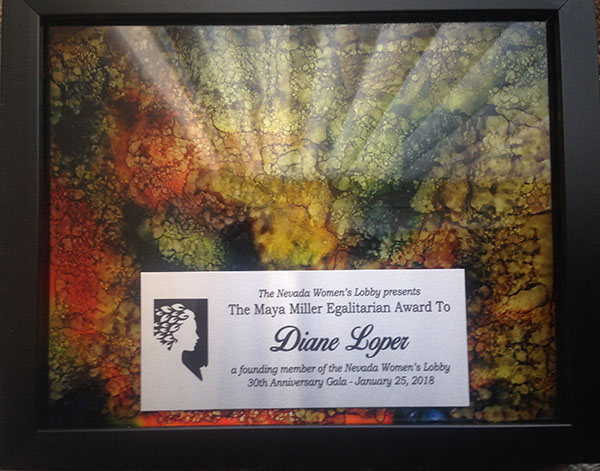 Diane Loper is one of the early activists in the domestic violence movement in Nevada. She volunteered for the Committee to Aid Abused Women and served on the board of directors in the 1980’s.

In 1983, Diane became the first Executive Director of the Nevada Network Against Domestic Violence (NNADV).  Diane was also the driving force behind the enactment of legislation sponsored by Senator Sue Wagner establishing Orders for Protection Against Domestic Violence in 1985.  As a member of the National Coalition Against Domestic Violence (NCADV) Steering Committee, Diane had learned about legislation being introduced in other states and brought the information back to Nevada. In that same session she also testified in support of legislation that created Nevada’s domestic battery arrest statute.  In 1990 she was hired by Reno City Attorney, Patricia Lynch, to be the first domestic violence victim’s advocate in a prosecutor’s office in Nevada. She held that position until 1997.

After attending the National Women’s Political Caucus Conference, Diane brought back information regarding the formation of women’s lobbying groups from other states. A group of progressive women formed the Nevada Women’s Lobby in 1989.

During her years as NWL steering committee member, Diane stepped into many roles including Chair of Grassroots Lobby Days and membership chair for several years and testified often at legislative committee hearings.

Her work has been recognized by Soroptimist International of Truckee Meadows as their 1988 Recipient of the Women Helping Women Award and by the NevadaWomen’s Fund as a 1998 recipient of their Woman of Achievement Award. Recently, in 2015, Diane was recognized at NNADV’s 35th Anniversary Luncheon and received the award for Community Advocacy.

Diane was married to Keith Loper for 62 years, former UNR coach and Emeritus professor, and has four daughters, one son and eight grandchildren. Diane still enjoys traveling whenever she can with friends and family and remains strongly committed to political activism and advocacy. 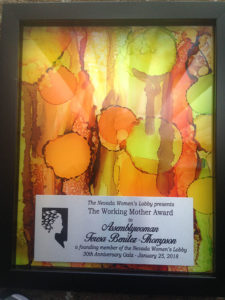 Teresa Benitez-Thompson was first elected to the Nevada Assembly in 2010, and in advance of the 2017 session, was selected by her caucus to serve as Assembly Majority Leader.

Teresa Benitez-Thompson was raised in Reno, along with two younger sisters, by her mother and her grandparents. Her mother brought us here to seek a better life and a fresh start after alcoholism and domestic violence brought an end to her marriage to her father. Benitez-Thompson’s grandparents lived in Reno, and they helped raise the family, instilling in them a strong respect for tradition and discipline, while coming out of retirement to provide for a stable life for Benitez-Thompson and her family.

Adding to both their happiness and strained finances, Benitez-Thompson’s sister, Mari had an unplanned pregnancy at age 14. The family pulled together to make sure that her sister was taken care of, and could continue on to graduate high school. Her grandmother babysat, her mother picked up extra shifts, and Benitez-Thompson got an after school job.

Some of the road blocks they encountered led Benitez-Thompson and her mother to join a newly formed group of low-income single mothers fighting to break the cycle of poverty. The group would evolve into Nevada Empowered Women’s Project (New Project), a non-profit whose mission was to further the rights of women and children living in or near poverty. She served as president for many years, and was honored by the National Center for Law and Economic Justice in 2006 for my work with NEW Project.

With scholarships from Miss America (she was Miss Nevada in 2002) and the Nevada Women’s Fund, Benitez Thompson earned her undergraduate degree from UNR, and a Master’s Degree in Social Work from the University of Michigan.

She returned to Reno after receiving her graduate degree and, determined to put her degree to work for the community, began working in child welfare as an adoption social worker. She hosted a television show featuring children in foster care who needed loving adoptive homes, and now works as a hospice social worker.

She resides in Northwest Reno with her husband, Jeff Thompson, a broadcast meteorologist and a climatologist, and their four children, Lily, Eli, Sandy, and Truckee. 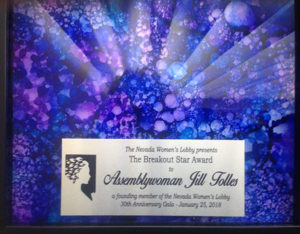 Jill Tolles has lived, learned and worked in Nevada for over 20 years and proudly calls the Silver State her home. She attended the University of Nevada, Reno where she earned her Bachelor’s and Master’s degrees in Speech Communication.

Throughout her life Jill has been passionately engaged in giving back to her community and serving others. She has been actively involved in ministry and volunteering through church and numerous organizations. Over the years she has served as a leader, speaker, facilitator, mentor, and volunteer to a broad variety of populations.

In 1998 she married her husband, Par Tolles, and began working for a Fortune 200 company as the Regional Manager of Northern Nevada and Lake Tahoe. She worked with hundreds of small business owners to find payroll and human resource solutions which gave her unique insight into our local economy, our job creators, and the challenges they face.

In 2001, Jill and Par welcomed their first child and she began her master’s degree program at the University of Nevada, Reno. By 2005, she began teaching at TMCC and soon after at UNR where she has taught Communication Studies for the past 10 years.

In 2013, she also joined the faculty of the National Judicial College. Jill instructs students and judges to think critically, ask questions, listen, resolve conflict and collaborate to find solutions to challenging problems. This led her to open her own small business leading trainings and consulting with companies and individuals on effective communication strategies.

Jill has also become an outspoken and staunch advocate for the safety of one of our most vulnerable populations, our children. She served on the Task Force for Child Sexual Abuse Prevention, established by the 2013 legislature, and developed and lobbied for the successful passage of SB394 which established statewide curriculum standards to teach personal safety to children. SB 394 passed unanimously out of both houses and was signed into law by Governor Sandoval during the 2015 legislative session.

Jill and her husband, Par, have been joyfully married for 18 years. They are the proud parents of two wonderful daughters, ages 12 and 14. Jill loves to spend time with her family, run, hike, and fly fish. 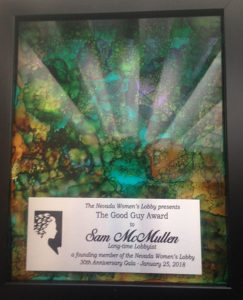 Sam McMullen focuses his work on governmental law, strategic positioning, lobbying and political strategy. He represents business and political clients for maximum positive effect in legal and strategic positioning, governmental relations and public affairs. Sam is skilled in multiple governmental and regulatory agencies including gaming, state and local taxation, licensing and permitting, insurance, health, utilities, environmental, energy, land use and planning, development and local government approvals, among others. He has vast experience in political law, including advice and counsel on initiative and referendum law and litigation, campaign and election law and practices, political contributions, and PAC laws and regulation.

Previously, Sam was a shareholder at Gordon Silver, president of The McMullen Strategic Group, ran his own law firm, was executive director of the Northern Nevada Gaming Industry Association (1990-1998), and was a counsel rising to the Vice President of Governmental Affairs at Harrah’s Strategic Group (1981-1990). He has been named a Best Lawyer in America® from 2011-2015, and one of Nevada’s Most Influential Citizens in 2010.

Sam is an attorney, focusing his practice on government affairs. He is admitted to practice law in Nevada. He received his Juris Doctorate from Georgetown University Law Center and received his Bachelor’s of Science (Bio-Medical) from the University of Nevada, Reno.

His community service is exemplified by two of his involvements, Three Square (a regional based anti-hunger operation) on their Board of Directors and as Counsel, and with the Western Folklife Center (and the National Cowboy Poetry Festival) on their National Advisory Council.