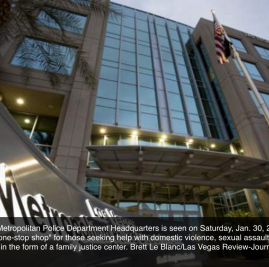 January 31, 2016 :: Las Vegas Review-Journal
In a valley where victim resources are spread far and wide, the Metropolitan Police Department is creating a “one-stop shop” for those seeking help with domestic violence, sexual assault and human-trafficking cases.

It’s called a family justice center, and it’ll be housed within the department’s central valley headquarters. The center is the first of its kind in Nevada, a state where the domestic violence climate is consistently one of the worst in the nation. And it’s been a long time coming — the center was researched, proposed and rejected over a period of 10 years before ultimately getting the green light.

“We finally have an administration that is saying this is important, that we need to do something different,” said Elynne Greene, a victim advocate with Metro and one of the project’s key players. She said that support has largely surfaced since Metro’s decentralization last summer — a move that shined more light on domestic violence cases because it opened up more department resources to the previously isolated domestic-violence unit.

So what is a family justice center?

It’s a place where everything from legal help to police help to housing help is easily accessible in a central location “because as you can imagine (tracking it all down) is so frustrating for a victim and often they give up,” Greene said.

She quickly noted that despite the center’s planned location at police headquarters, victims are not at all obligated to report their problems to the police. Instead, the location offers a layer of security for victims and their children that research shows they “actually like, which surprised us,” she said.

Instead of a police location scaring them away, Greene said her team looked at other centers in California — where the concept originated — and learned it actually makes victims feel more safe.

“Yes, there will be some that will not come to law enforcement because they are afraid, but if we educate and say, ‘You do not have to file a police report,’ I think that’s going to give a different face to it,” she said. “It could be a case from five years ago; they can get that assistance right then and there.”

The project’s key players include Safe Nest, the Rape Crisis Center, victim advocates, prosecutors from both the county and city, and Metro.

“The model not only improves access for the victims and provides a supportive and safe environment to have many needs met, but it also empowers victims by reducing roadblocks and challenges to safety, which is one reason victims often cite for not reporting a crime or later recanting,” Metro said in a statement.

The center is long overdue in Nevada, which typically ranks “the worst of all the best things and the best of all the worst things” in terms of domestic-violence data, said Sue Meuschke, executive director of the Nevada Network of Domestic Violence. In Metro’s jurisdiction alone, 25 percent of homicides are domestic-related, on average.

More than half of all U.S. states have centers like the one slated for Las Vegas, including all the states that border Nevada: Oregon, Idaho, Utah, Arizona and California. Arizona alone has 17.

While the project is meant to simplify the process for victims, it’s important to remember it won’t immediately solve the issue, Meuschke said.

“I think in a community as large as Las Vegas, (the center) is probably a good tool, but again, this is one of the many tools we should have,” she said. “Yes, it’s great if we make an arrest, it’s great if we make a prosecution order. But if some of these things happen and (the victim) is looking at homelessness, that’s some of the complexities we’ve learned over time.”

“I think the problem is so complex that we need to have complex strategies,” she said.

Some of those complex strategies includes educating and empowering victims, which can also happen at the new center, said Daniele Dreitzer, executive director of the local Rape Crisis Center.

She pointed to an example some local victims face: citizenship status.

“We are never allowed to report citizenship status to immigration, and there are special visas for people who are in abusive situations,” Dreitzer said. “But if you don’t know anything different and that’s held over your head for months or years, and you’re worried for the safety of your children … it’s those situations that keep people captive.”

Greene said the center will open sometime this summer, with a grand opening scheduled for October, which is domestic violence awareness month. She envisions an expansion on the horizon in the next five to eight years, with a stand-alone building that can house group meetings and a drop-in center for victims — all changes and additions that will come from victim feedback.

Other programs could include a workspace to edit resumes, a dress-for-success program with free business clothing and job-interview training.

“It’s not just for someone in crisis,” Greene said, “but also someone who may be down the road from crisis, who left the relationship and wants to get their life together.”