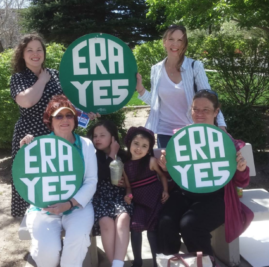 More than 200 women and men from across the state will arrive at the state capitol to learn firsthand tips on being an effective citizen lobbyist. On Sunday, NWL will kick-off this year’s event by hosting a series of tabletop workshops to discuss key issues on pay equity, paid leave, safety from domestic violence, and child care. There will also be panels on grassroots lobbying, including tips from professional lobbyists and legislators on how to be an effective advocate. Sunday evening will feature Sara Bradshaw, of Eleanor Smeal’s Feminist Majority, who will be the keynote speaker at dinner.

On Monday, March 20th, participants will be able to witness the historic vote in the Assembly on Nevada’s ratification of the Equal Rights Amendment 45 years after Congress first approved the measure.