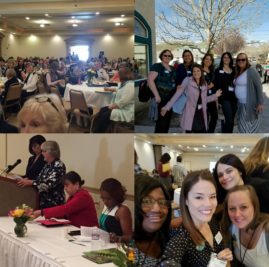 On the 45th anniversary of Congress’ passage of the Equal Rights Amendment (ERA), Nevada (finally) ratifies, making us the first state to do so in more than three decades. We only needed three more states to make the ERA a Constitutional Amendment and Nevada just filled one of these slots. Just two more to go!

We owe a debt of gratitude to Senator Pat Spearman who introduced the bill to ratify and led it to victory!

As the ERA was being debated in the Assembly, Nevada Women’s Lobby and our partners were in Carson City with more than 200 outstanding citizen lobbyists for our 2017 Grassroots Lobby Days.

Attendees, over the course of two days, learned how to be effective advocates from lobbyists and policy experts and then met with legislators on a number of important bills, including ERA ratification.

It was inspiring to be there and we are so proud of everyone who participated. Check out photos of Grassroots Lobby Days here.

Also check out some of the great press on the ERA passage and Lobby Days:

‘This bill is about equality. Period.’: Nevada OKs the ERA
Reno Gazette Journal

Inside Grassroots Lobby Days in the Nevada Legislature
Nevada Forward